Clients often ask me how they can have colourful flowers all year round. They don’t want a lot of fuss and bother. Something that you can plant and leave. Does such a fantasy plant exist? Absolutely! Bulbs are the perfect plant. Most bulbs will not only flower for year after year, they also spread generously, creating carpets of colour.

Bulbs mean spring daffodils and tulips to many people. They are just the start. It is possible to have bulbs, corms or tubers, flowering in the garden from January to November.

This has been a good year for snowdrops and I have seen their dainty white heads nodding in hedgerows and under trees all around Somerset. They are traditionally used to celebrate Candlemas on 2nd February and were known as February Fair-Maids long ago. Winter aconite, Eranthis hyemalis, is another February bulb that is much less well-known. It has a buttercup yellow flower surrounded by a ruff of green leaves. It is small but the golden colour shines out in a winter border. A third February bulb that can appear in January is Cylamen coum (technically a tuber). These Cyclamens are all round performers because once the delicate pinky-white flowers have gone over you are still left with a very useful evergreen, groundcover created by their disc-like leaves. Perfect for a shady spot where nothing else will grow. These are not to be confused with Cyclamen hederifolium which are autumn flowering. Another great February flowering bulb is the species, or dwarf, iris. These dainty flowers look great in pots where they can be protected from the winter wet.

You may think the next flower in the bulb parade would be a daffodil, or Narcissus to be botanically correct. Not necessarily! There are daffodils that flower in March, for example ‘King Alfred’ or the misleadingly named ‘February Gold’, but why go for the obvious? Glory of the Snow, or Chionodoxa, are lovely little star-shaped bulbs that come in blue, pink or white. The blue ones look wonderful clustered around the base of birch trees. 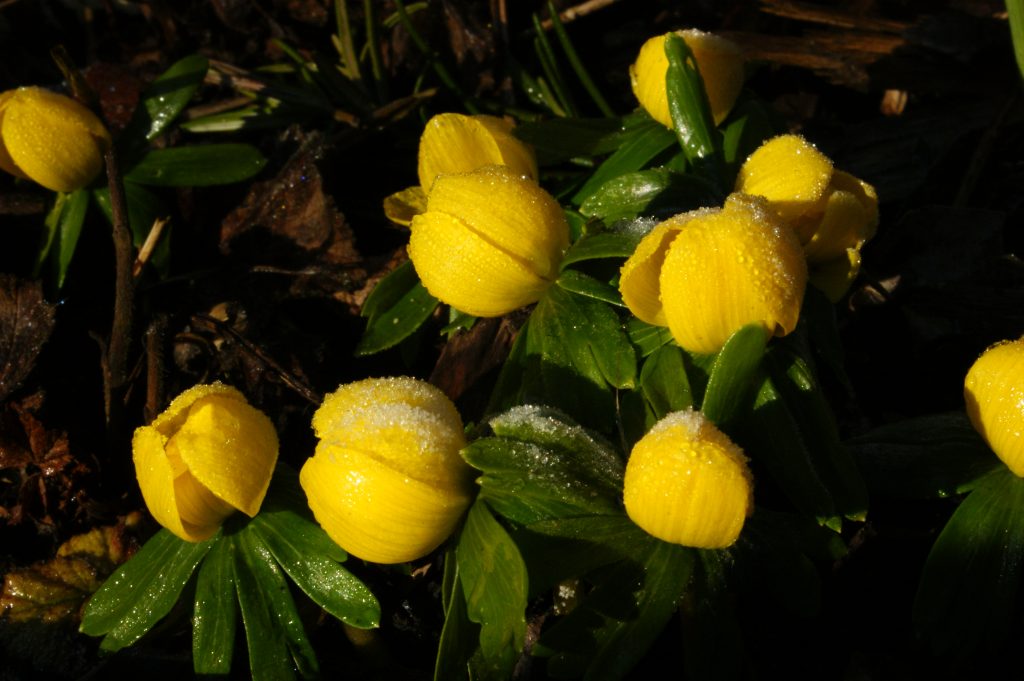 Winter aconites on a frosty morning

However, you can’t be without daffodils in April. Avoid the bags of generic ‘daffodil bulbs’ and chose varieties carefully to get the most impact. There is a dazzling variety of shapes, heights, flowering times and even colours. I sometimes have clients who don’t like yellow in the garden but that doesn’t mean they can’t have daffodils. Narcissus ‘Mount Hood’ has pure white petals with the palest cream trumpet and looks very elegant 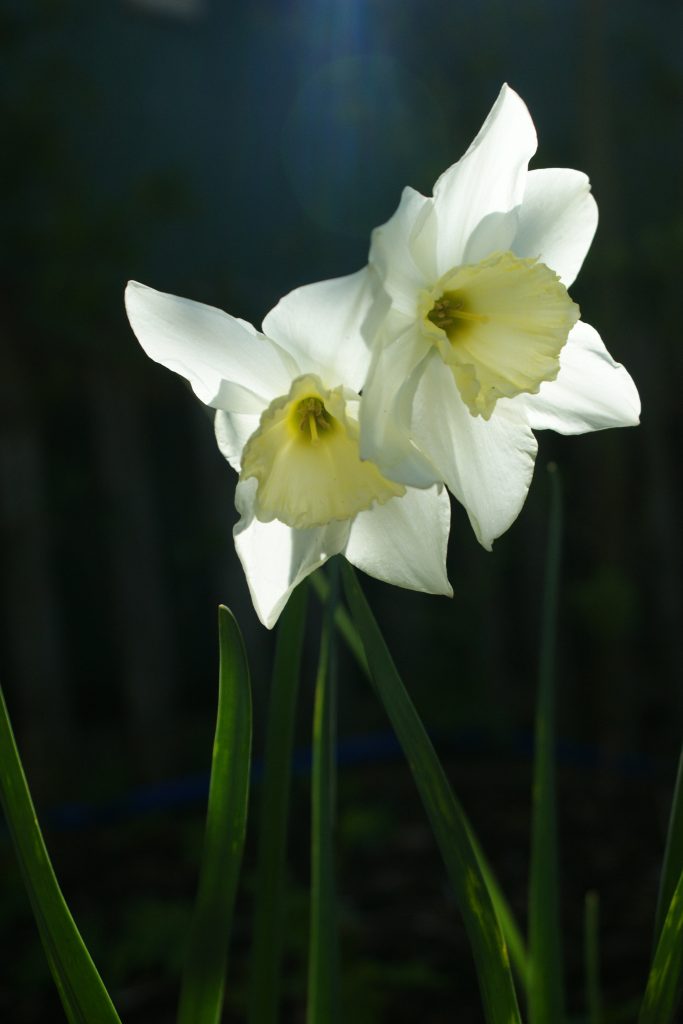 Tiny Narcissus ‘Baby Moon’ has two or three flowers per stem and should be planted where you will get a waft of scent as you pass by – pure spring!

Before we move to May tulip time I would like to introduce you to species tulips. These are the plants as they are found in the wild, unsullied by plant breeder machinations. They are shorter than the more popular tulips but flower earlier and come back year after year. My favourite is Tulipa Turkestanica which can appear as early as March. 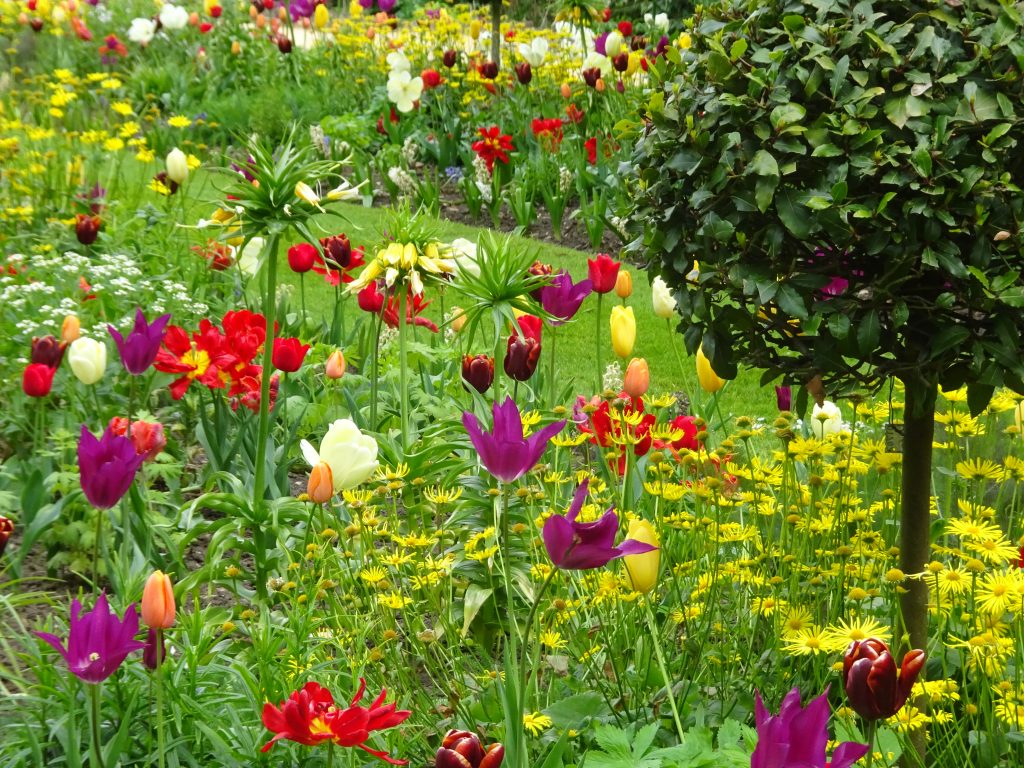 The more mainstream tulips are available in a bewildering array of colour and sizes. I would suggest trying the shapely Lily-Flowered tulips. These tall, sophisticated flowers will grace any border. Colour is a matter of personal taste but two contrasting colours such as black (try ‘Queen of the Night’) and white, yellow and purple or blue (try ‘Bleu Amiable’) and orange can work very well.

As we move into summer, the bulbs just keep on going. Dutch Iris come as small bulbs and are very easy-going, unlike their fussier bearded cousins. Just stick them in the ground and next June beautiful irises will decorate your garden at a time when many flowering perennials are still in bud.

Alliums are another June flowering bulb that provide maximum impact for minimum effort. Their dramatic spherical flower heads create a great contrast with other plants.

It does go a bit quiet on the bulb front in July and August. You could try the striking fox-tail lily, Eremurus which will tower up through planting in July, but it can be a bit temperamental. The Martagon, or Turks Cap Lily also flowers through July.

The next easy hit of bulb action is in September when Colchicum, also known as Naked Ladies, appear. The flowers look just like crocus, they are sometimes known as Autumn crocus, but they appear from September through to October without their leaves. They do produce glossy, large leaves in the spring which need to bear in mind when you are planting as you don’t want them to hide the dainty spring bulbs. Cyclamen hederifolium will take you through November, with a few brave souls flowering into December. In January the cyclamen coum will take the baton and you are launched into another year!