Frome has a choice of local independent nurseries where you can rely on friendly expert advice and the confidence that comes with buying locally grown plants. Crafty Gardeners designer Michelle Wake reviews what’s available and asks for tips on plants for winter interest. 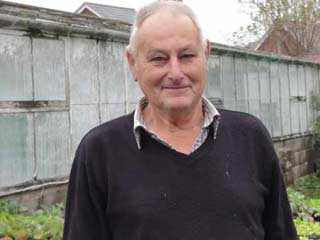 ‘There were 11 independent nurseries in Frome after World War 2’, says Ray Minty as he works on holly wreaths for Christmas, ‘Minty’s started in 1917 and we are the only ones left.’

Minty’s specialises in bedding plants and floristry at the 2 acre site near the Frome Lidl. When Ray joined the firm, founded by his grandfather, the nursery grew a wide selection of plants. But as the cost of fuel to heat the greenhouses rose, the nursery started to buy plants in. Today they still grow some plants from seed but also buy in plug plants to grow on in their on-site greenhouses. 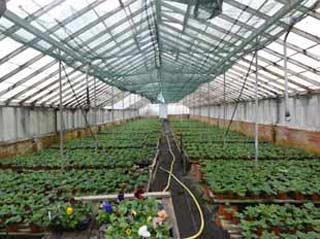 Winter pansies growing in the greenhouse at Minty’s

Ray’s son David does floral arrangements for all occasions, including the upcoming Christmas festivities. David recommends planting up containers of pansies, violas, polyanthus and primroses to create some cheer throughout the winter months.

Just 10 minutes from Frome, Barters Plant Centre, has been in business for over 50 years. Legh and Di Walker bought the nursery in 1981 and are commited to growing as many of the plants on offer as possible.

Barters staff are horticultural experts and the nursery recently showcased its expertise by grafting rare old Wiltshire apples for a community orchard in Marlborough. Frome residents can benefit from Barters expertise at Frome Community College whose RHS Level 1 practical award is being taught at the nursery. 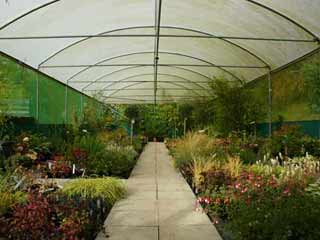 The ‘Garden Path’ at Barters is an inspiring planting display

Barters is more than a nursery and also offers most of the other garden products found at the garden centre chains. A selection of the stock is displayed as a planting suggestion in the ‘Garden Path’ polytunnel, providing inspiration for those not sure how to use their purchases. If you want to inject some winter interest into the garden, Barters suggests winter-flowering shrubs such as mahonias or the fragrant Viburnum x bodnantense ‘Dawn’. 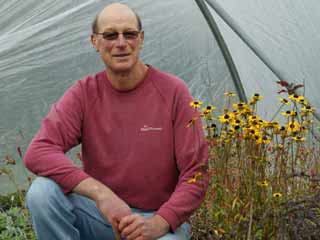 Stephen and Emma Lewis-Dale are plant enthusiasts who bought the green field site that has become Mead Nursery, just outside Rudge, 20 years ago. They lived in a caravan while their house was built on site and have developed a thriving nursery that attracts customers from as far afield as Germany.

The nursery offers herbaceous perennial, many of which are on display in the mature gardens. Over 500 varieties of alpine plants are also available, including some hard-to-find selections. The German visitors came for the rare yellow Gladiolus papilio.

Stephen has a number of ideas for winter interest in the garden. He suggests Ceratostigma plumbaginoides for good groundcover with red autumn foliage and vivid blue flowers for early winter followed by Cyclamen coum for late winter colour. The Giant Fennel, Ferrula communis, is a large dramatic plant during the summer but the fresh-green, feathery leaves are on display throughout the winter, resembling baby ferns. 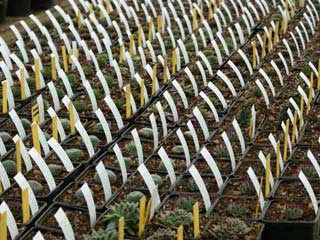 Mead Nursery is closed to the general public over the winter but open by appointment. The web-site has a wealth of plant information and is a great resource for planning your new planting schemes for spring.

The 17th Century walled garden in Mells is a treasure trove of herbaceous perennials, cut flowers and tasty treats.

Plants are not only grown on-site but can be seen planted out in the atmospheric garden. The Nursery provides an eco-friendly wedding flowers service and the Garden is one of The Crafty Gardeners’ workshops venues. 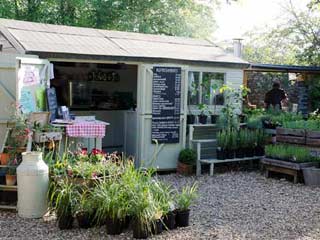 Lunch and tea-time treats are on offer with the plants at Mells Walled Garden. Picture credit – Heather Edwards

New owner Sam Evans suggests Lonicera fragrantissima, for winter interest in the garden. ‘It flowers in January, when everything is bare, and smells of lemon sherbert. Herbaceously it’s got to be hellebores for winter. I love the oriental hellebores but I’m also very fond of the lime green native Helleborus foetidus.’ The Walled Garden closed on Dec. 23rd and re-opens on March 1st. 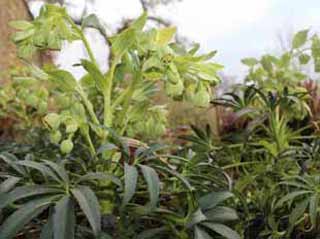